Social media is a huge, free tool that companies can use to boost their brand. For example, tech companies can go to the Top 2022 PR Agency that is able to drive social media engagement, monitoring and analytics across social platforms. However, what is the right type of content to produce for your social platforms? While images and simple text-based posts can be engaging, evidence shows that video is the way to go.

This is why Video Marketing is on the rise to become a major channel for any promotional campaign of a product. This post informs the reader about the video duration as a critical success factor for a video reaching a solid subscriber base.

Why choose Video Marketing? Let's hear what psychology has to say..

A video has dual qualities of visual and voice which stimulates the limbic system and amygdala, the processing centre for our brain. These heightened emotions are coupled with an inherent flowing storyline of a video, leading it to set deeply into our memory. In his unique manuscript, "The Organization of Behavior", Donald Hebb has described that Memory Engrams, the bread crumbs that our brain uses to recall a particular memory is best placed through auditory and visual inputs. And, you know the famous old saying, "A product set in the memory of a customer is a product almost sold"

Stats play in the favor too...

A related study conducted by Social Bakers on influence of different ways used by promoters on Facebook pristinely puts the results in favor of video as a better vehicle for product penetration. A striking 135% increase in Average organic reach, on average, has been observed when you post a video instead of a photo. And, a 148% increase in Average fan reach took place with a marketing campaign supported by video components as the primary vehicle for content delivery.

Complementing it, lies a simple figure of over 1.5 billion, which stands for the total number of YouTube users and the fact that it is almost half of the world population online, making it a powerful tool to reach further inside the potential customer base all over the world. That being said, certain industries have to be more careful about what they put in their videos, as there are strict rules on many social media platforms about what can be shown in the video. This is certainly true for the cannabis industry, which can make it really tricky for businesses to promote themselves using these videos. One way they can help themselves out with this could be to work with a canada cannabis marketing expert, or an expert wherever in the world they are, who will have the knowledge and skills to be able to work with businesses to create content that will pass the various checks for social media distribution and start to build backlinks that will, hopefully, translate into more traffic to their websites.

"One video fits all"- A conceptual virus to any promotional campaign

Today, the society preferences have gone from reading lengthy stories and tales to the domination of a 3 minute trailer. This trailer is vital in formation of an opinion about the 2 hour movie, ultimately deciding whether the movie is going to be a hit or will see empty halls.

But, observe and respond something for me, will you!

Where do you find the movie that you wanna watch? Where do you find its trailer? Or its teaser? How about its motion poster? What do you think, where will you see its star cast will post the "behind the scenes" or bloopers? Where the critic's reviews would be found?

If you are finding your answers different in each of those question marks, then you will concur with me that a separate variant of your video for different social media platforms will provide a successful marketing campaign.

A ton of research by MediaKix on the sectarian distribution of time spent per day on the current social media platforms enjoyed by the modern generation. According to one of its openly published studies, YouTube uses the peak 40 minutes, Facebook with another lion's share of 35 minutes, Snapchat closely bleeding on 25 minutes, Instagram pressing with a valuable 15 minutes and Twitter holding a meagre share of 1 minute.

With a psychological time allotment of 15 minutes to Instagram, a 5 minute promotional video will lead the viewer scroll it down instantly. But, instead a 1 minute crisp piece perfectly hooks the visitor with its tight perkiness and takes it to the 40 minute time zone of YouTube where the full video will be able to work its magic.

A study by Animoto says that nearly two thirds of viewers prefer a video under 60 seconds on Facebook. This clearly corroborates the mindset with which a viewer steps into the social media platform. Facebook viewers thus, tend to value short, low duration videos that keep the viewer tied to the feed and generate more views. While YouTube serves a long form committed viewer to deliver full content of the product. The following infographic proves this point. While the Average View to Engagement Ratio for Facebook stands at 30.69, it banks at 22.42 for YouTube. Hence, a view on YouTube is much more valuable than one on Facebook. While Facebook gets what we can call as "Empty Views", YouTube holds the attention of viewers much more than Facebook. Hence, a YouTube video is most appropriate for delivering long form content about the product. While the major motive of a Facebook video can be considered in carrying the viewer to the YouTube platform where the original full video can be presented.

Wistia in one of its statistical production, plotted a real time curve for Engagement of a viewer versus video length. With the highest engagement occurring in a 2 minute video, it is shown to depict an inverse proportionality towards video length. A sharp decrease in viewer attention after 2 minute benchmark recommends editing of the video to fit the 70% bar. The evident 6 to 12 minute plateau suggests a viewer demographic which if engaged till the 6 minute mark, shows no decrease in engagement up to the 12 minute mark. This observation reinforces the position of YouTube in long form content consumption.

Having a video, both created and curated to best deliver the content to the viewer is not the end of the road. The video still needs to transcend to different frames of varying aspect ratios for each social media platform. But, it is one of the major success pillars that support and ensure a higher Return on Investment for any content marketing campaign.

How to Add Subtitles to a Video in 3 Easy Steps 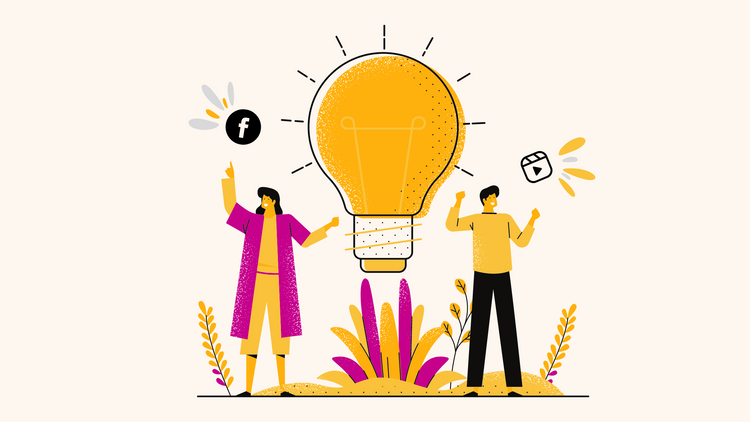 Facebook has held a solid position at the top among users, with many other platforms entering and leaving the market.
Jan 27, 2022
8 min read